We need to imagine new types of borders in this era of fervent fence building.

Trump promised his supporters a “big and beautiful” wall. Accordingly, the recent design competition required it, among other things, to look good – from the US side. Yet it seems unlikely that the wall will ever be completed. The areas where US border security deemed a physical barrier necessary and viable have already been built. The remaining sections of the border feature formidable natural barriers where countless innocent people have lost their lives.

The wall brings to mind another seemingly impossible engineering feat from the realm of science fiction. In the concluding novel of Cixun Liu’s Remembrance of Earth’s Past trilogy, humanity is forced to devise an extreme plan to save itself from higher intelligence beings. One option is to create a “cosmic safety notice” by transforming the Solar System into a reduced light speed black hole. The idea being that if you cannot reach the speed of light, you cannot attack others and are therefore not a risk. The Black Domain is essentially a prison that humanity would enter into voluntarily in order to keep itself safe.

The story offers ways of thinking about the current spate of border wall building: the US version is only the best-known example. India, too, is proudly declaring the impending fulfilment of its ambition to completely seal its borders with two of its neighbours. Pakistan, Iran and Hungary are also busy building barriers.

Just as the Black Domain was constructed to keep humanity in, so it seems that such walls are not just about keeping others out but also about keeping ourselves enclosed. This fits with the narrative of protection and security that Trump espouses. The design competition for the wall asks for two prototypes: a solid concrete wall and “other border wall”, a category more open to alternative ideas.

Of the 450 companies that submitted initial ideas around 20 will be chosen to build their prototypes. Entries included a proposal for a wall that incorporates a sensor system, an aqueduct, a south-facing solar panel wall and a wall that is unashamedly militaristic in its origins. These are all barriers that could and do work both ways.

When looking out towards the heavens from inside the black hole of Cixin Liu’s novel, everything becomes distorted and doubled by the slowing down of light. Similarly, one of the more disturbing wall proposals, proposed by Latino-owned practice PennaGroup, imagines parts of the wall becoming a one-way mirror. The US side can see out but the Mexican side cannot see in – a black hole from the outside that distorts the vision and thinking of those on the inside.

A few proposals have used the competition to critique the wall itself, yet none have quite succeeded. MADE Collective’s design, which they call Otra Nation, is considered the most “radical”. It envisages a third nation along the border complete with a gargantuan Hyperloop transit system that aids movement across the border.

Presented in a slick visual language, the proposal displays all the political shortcomings of mainstream architectural production. The proposal rebuts Trump’s divisive vision with a grand rhetorical device of its own, what they call “the world’s first continental bi-national socio-ecotone”. It brings to mind the overblown manmade landscapes of Dubai: an overwhelming fantasy architecture where small-scale intervention would suffice.

Otra Nation’s open border system reveals the darker side of this utopia – open borders at the cost of hyper surveillance. While the proposal for a smart surveillance wall by Dark Pulse Technologies has rightly been labelled dystopic, the same logic in Otra Nation has been overlooked. The border in their proposal has been diffused so that it is present everywhere for those lacking the correct smart chips and IDs.

These competitions were initially set up and run in West Germany in anticipation of the wall coming down and had no input from the other side. Many of their winning designs were later built – realising the capitalist architectural imaginary of only one side.

Otra Nation is of course a little cannier. Architecture has moved on since the 1980s and early 1990s. The anonymous group includes members from both sides of the border and I suspect Teddy Cruz, a Guatemalan born US architect and urbanist whose design work has addressed the US-Mexico border, is hiding behind one of the spirit animal masks that the group professes to love.

Yet their outlandish proposal does not live up to the other more nuanced work that Cruz’s studio has produced in response to the border. Those projects sought to understand the border as a condition, one that provides both opportunities and obstacles. But the restrictive terms of Trump’s competition have, once again, curtailed how architects think about and imagine the border.

When architects and artists are not held back by such reductive framing, truly critical, innovative conceptions of borders emerge. Such work contests the dominant narrative of security and isolation while also working actively towards producing other possibilities – something sorely needed in this new age of fervent fence building.

In 2004, activist architecture group Hackitectura established a network link across the Straits of Gibraltar that became a free public communication interface between two continents. The project was a critique of and action against the increasing surveillance and security regimes of the militarised border.

Another project, the Transborder Immigrant Tool by the Electronic Disturbance Theatre, uses the GPS capability of a low-cost mobile phone to guide those crossing the US-Mexican border to water points. These small-scale, modest interventions are fleeting yet powerful. They offer critical design alternatives to the grand gestures described above.

In Liu’s novel, the Black Domain is dubbed “God’s Engineering Project”, yet it is eventually rejected not only because of technical challenges but because it was deemed a fate worse than death to cut humanity off from the rest of the universe. Apparently, Barack Obama was a fan of the novels. Perhaps Donald Trump should also read them.

Lecturer in Architecture, University of Sheffield

I was appointed Lecturer at Sheffield in 2012 and I have previously worked as a research associate at Sheffield and a Post-doctoral Research Fellow at Technical University Berlin. I have previously taught at Goldsmiths, University of London and University of East London and have also worked in practice in London for several years. I am interested in questions of diversity, migration and geo-politics and how these can be addressed through spatial practice, including questions of post-coloniality, diasporas and border practices. I address some of these issues in my work with OPENkhana, a collaborative that works between architectural, computational and artistic practice. 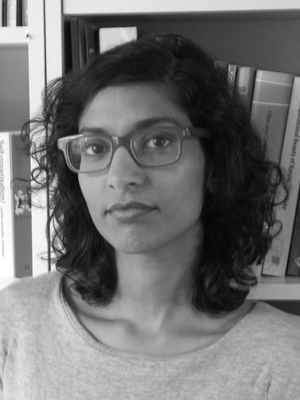